Pulsatile tinnitus is the perceived sound that is heard in synchrony with the patient’s own heartbeat.
It is really as if hearing your own heart, beating in your ear. No matter exactly how it sounds, it usually follows the heartbeat. 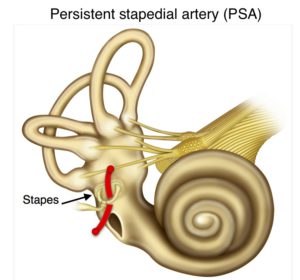 Although pulsatile tinnitus is not that common, estimated to occur in only 3% of patients suffering with tinnitus, it may be indicative of a potential serious condition.
Most often pulsatile tinnitus is caused by blood flow disturbances in the head and neck region. A vascular or blood vessel cause should always be excluded. It is often referred to as vascular tinnitus.

A venous hum is a continues sound reinforced by transmitted arterial pulsations. It may also present as a pulsating tinnitus.Pulsating tinnitus is generated either due to an increase in blood flow or flow through a narrowing in a blood vessel.
Despite clinical findings, ultrasound of the neck vessels, magnetic resonance imaging, computed tomography and conventional angiography may be requested to establish a diagnosis. 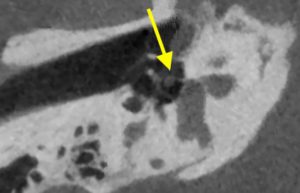 A rare persistent stapedial artery can cause a pulsating tinnitus (yellow arrow).

Some of the causes of pulsating tinnitus include:

The treatment of the pulsating tinnitus depends on the cause. In some cases, it may be lifesaving and even prevent stroke!
Although the prognosis is usually good I would seriously encourage that if suffering from pulsating tinnitus to have it investigated.