Can a virus cause a vestibular schwannoma

Can a virus cause a vestibular schwannoma. A sporadic vestibular schwannoma is a schwannoma that does not occur as part of a syndrome such as neurofibromatosis type 2 (NF2). Before answering the question, one needs to acknowledge the fact that viruses are responsible for certain cancers. Worldwide it is estimated that between 10-15 % of cancers are caused by viruses. Examples of such cancers include liver cancer, some lymphomas, Kaposi sarcoma and cervix cancer. 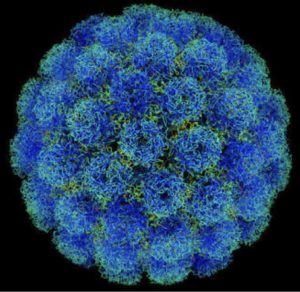 Viruses can cause certain cancers.

Viruses are very small infective agents. They are so small that they cannot be seen by light microscopy. They consist only of a nucleic acid molecule (the stuff DNA is made of) and a surrounding protein sheath. Viruses can only multiply when incorporated in a living cell of a host.

The majority of intracranial vestibular schwannomas originate from the vestibulocochlear nerve in the internal auditory canal of the temporal bone. A number of different viruses affect the inner ear and it’s nerves. Some examples include the mumps virus, cytomegalovirus, herpes virus and the human immunodeficiency virus (HIV). It has therefore been questioned whether a virus could not be responsible for the development of a sporadic vestibular schwannoma.

Recently Havik and co-workers analyzed 46 vestibular schwannomas for viral DNA and RNA. They used a technique consisting of the microarray based ViroChip. This microarray contained an astonishing 60 000 probes designed to detect all viruses, both known and novel, based on sequence homology. The outcome of their study?

The final word, however, has not been spoken. It may be that a virus may still be responsible but in such a way that it precedes the tumour formation by a few years, making it impossible to demonstrate at an early stage. Another possibility may be that a virus induces tumor formation but then disappears from the cell at an early stage before the tumour actually forms (hit and run mechanism). In any event it currently seems to be safe to say that a virus is not responsible for the formation of a sporadic vestibular schwannoma.