Cholesteatoma is a disease of the ear. It is characterized by a cystic growth that consists of an outer skin layer with dead superficial cells or keratin on the inside. It can occur in the middle ear, mastoid process and any other part of the temporal bone where skin is not naturally supposed to be present.

Cholesteatoma can cause hearing loss

Like other skin of the body the skin of the ear canal normally sheds its superficial layers of dead cells. The keratin naturally migrates out of the ear canal, eventually mixing with glandular secretions to form ear wax. In cholesteatoma however the keratin accumulates because it is not able to migrate outwards. As the skin slowly grows further, it eventually destroys normal structures in its pathway. 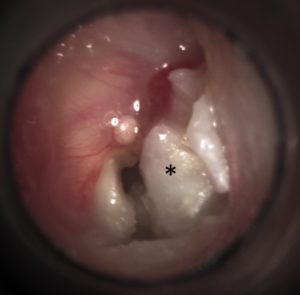 Cholesteatoma appears as a white shiny lesion in the ear

Exactly why cholesteatoma is acquired is still debated and more than one process have been blamed. It occurs in all age groups with a peak incidence in the second decade. In rare case children can present with cholesteatoma without any specific reason. When assumed to be born with it the term congenital cholesteatoma is used.

It may present with hearing loss, recurrent ear infections, foul discharge from the ear, pain (otalgia), vertigo, tinnitus, facial nerve weakness and headaches. More severe involvement may cause meningitis, brain abscess and rarely death. With examination a white grayish growth may be seen.

When trying to determine the extent of a computed tomography (CT scan) is often ordered. This will show the destruction of the hearing bones (ossicles) and other bony parts of the temporal bone.

Cholesteatoma is a progressive lesion that needs to be managed at a certain point. Treatment include regular cleaning of the ear by removing the keratin but the only permanent solution is surgical removal. The surgical procedure the remove it from the mastoid of the ear is called a mastoidectomy.