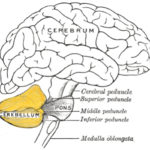 The cerebellum is involved in episodic ataxia type 2

Episodic ataxia type 2 is a genetic disorder that is inherited in an autosomal dominant fashion. It is therefore common to occur in certain families and another family member is usually effected. The underlying defect is a mutation of a calsium channel gene, CACNA1, on chromosome 19. The defective calsium channel is specifically found in the cerebellum, explaining the symptoms.

The symptoms usually start in late childhood and early adulthood. It is related to episodes of emotional and physical stress and may also be triggered by alcohol, heat, illness, cafeine and even sudden movements. The anti epileptic drug phenytoin has also been linked to episodes. The ataxia and vertigo last for minutes to days and may occur as often as 3-4 times a week or as seldom as once a year. It is also not uncommon for patients to experience other neurological symptoms such as double vision, tinnitus and even slurred speech. Patients are usually asymptomatic between attacks but may later develop permanent nystagmus, abnormal central eye tracking and ataxia. Migraine headaches are found in more than 50% of patients with episodic ataxia type 2.

Genetic studies are expensive and it is debated whether it is necessary as not a lot of treatment options exist for EA2. Treatment options include drugs such as acetazolamide and the potassium channel blocker 4- aminopyridine (4-AP).

Not a lot is known about the long term prognosis of EA2. In some patients symptoms may disappear but in others may continue untill old age. It does not shorten life expectancy.