An auditory brainstem implant (ABI) is an electronic device that was designed to provide sound to profoundly deaf patients. It is surgically implanted, directly into the brainstem. A natural opening in the brainstem called the foramen of Luschka leads directly to the cochlear nucleus. It is at this level where the ABI works.

The ABI also consists of an external audio processor that looks just like the external part of a cochlear implant. The difference between the ABI and the CI is that the external audio processor of the ABI picks up the sound waves and transmits the processed signals directly to the brainstem. It by passes the cochlea and the cochleovestibular nerve. Therefore it can be concluded that an ABI is indicated for those patients where a CI does not work or is not indicated. These conditions include absent or ossified cochlea, absent and damaged cochleovestibular nerves and tumours (acoustic neuroma) of both nerves seen in neurofibromatosis type 2 (NF2).

Difference between an ABI and a CI

The ABI was developed in 1979 at the House Ear Institute in Los Angeles. The original indication was NF2. Of the 1500 patients implanted in the world so far the majority was for adults with NF2. Over 100 children have been implanted.

The outcome with an ABI is less predictable than with a CI. The speech understanding with an ABI is not as good as speech understanding for CI. ABI requires brain surgery and is offered in selected specialized units only. In patients with NF2, improved sound awareness, identification of some environmental sounds and improved performance with lip-reading were regarded as a satisfactory result. Better results such as the understanding of speech without visual cues (“open-set” speech recognition) and the ability to talk on a telephone is seen in non-NF2 cases and lately also in NF2 cases. The reasons for this include improved technology, refined surgical techniques and better coding strategies. 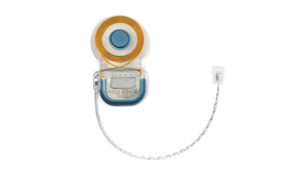 ABI – part that is implanted in the brainstem