Alcohol associated dizziness is nearly always self-inflicted. Dizziness is considered a normal consequence of too much alcohol. This is not surprising, considering that alcohol is actually a toxin and a suppressant of brain cells. Acute alcohol intoxication suppresses the cerebellum and the vestibular system. This is the main reason that the patient becomes clumsy, off balance and in-coordinated.

The effect on the cerebellum is so typical that in the days before breathalyzers and blood tests, traffic officers tested cerebellar function in those suspected of driving under the influence of alcohol. 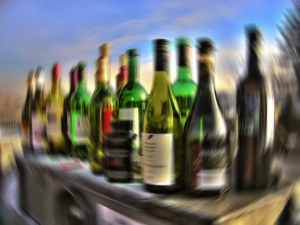 Alcohol, the most common cause of dizziness.

Alcohol also affects the inner ear. Positional alcohol nystagmus (PAN) is a very well described phenomenon of inner ear alcohol intoxication. Alcohol has a tendency to saturate certain parts of the inner ear faster than other parts. This disturbs the equilibrium of the inner ear fluids for a certain period of time. The result is vertigo and nystagmus especially when moving. Over time the alcohol reaches a stable equal saturation point in all the compartments of the inner ear and the symptoms disappear. The problem is that after another period of time the alcohol starts moving out of the ear and the same process of unequal de-saturation occur. The vertigo and nystagmus recur until all the alcohol is gone. This happens hours after the last drink.

The practical implication of this is seen in aviation where pilots are not allowed to fly within at least 8 to 12-hours after alcohol consumption. This is obviously depends on the amount of alcohol consumed. For the same reason alcohol should not be taken 48 hours before vestibular function testing with videonystagmography(VNG), as it may influence the results. An open question is what the effect is on driving shortly after a patient’s blood alcohol level has dropped to within the allowed range!

Another mistake people often make is to believe that the effect of heavy drinking is only temporary. With repeated exposure permanent changes in brain cells occur. This is not even considering all the other health risks.