Branchiootorenal (BOR) syndrome is a rare disorder that effects the ears, neck and kidneys. The prevalance in Western countries is 1/40 000. It is a genetic condition inherited in an autosomal dominant way and is characterised by mutations in the EAY1, SIX1 and SIX5 genes. 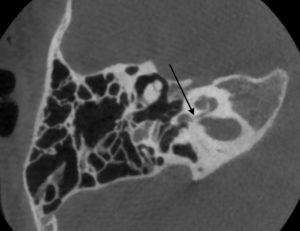 The clinical features of branchiootorenal syndrome occur due to a developmental problem in the embryo between 4 to 10 weeks of pregnancy. Branchial refers to gills or in the case of an embryo to the parts derived from the embryonic branchial arches and clefts. Oto- refers to ear and renal- to the kidneys and urinary tracts.

Ear abnormalities include small extra openings (pits) or skin tags in front of the ears, malformations and even absence of the outer ears (pinnae). Middle and inner ear abnormalities lead to hearing loss. Depending on the severity, the hearing loss may vary between mild to profound.

Another finding is the presence of cysts or fistuale (small communicating openings) along the side of the neck.

The kidneys are often underdeveloped (hypoplastic) or absent which invariably leads to renal insufficiency and renal failure. In those patients, lucky to have normal kidneys the condition is called branchiootic (BOS) syndrome.

The diagnosis is mainly clinical, as genetic tests only yield abnormalities in 50% of patients. An audiologist will conduct hearing tests and help to guide parents in making decisions regarding hearing improvement. A computed tomogram (CT) scan may be ordered to evaluate the antomy of the cochlea. In branchiootorenal syndrome the inner ear typically shows an “unwound” cochlea with the middle and apical turn displaced anteromedially, away from the basal turn. If, in addition the facial nerve is displaced medially it is highly specific for BOR.

The treatment of branchiootorenal (BOR) syndrome includes surgical correction of the neck fistulae, pre-auricular pits and skin tags. Renal surgery, dialysis or kidney transplant may be necessary. Hearing loss requires early intervention for example ventilation tubes, amplification in the form of hearing aids and if this is inadequate, cochlear implantation (CI) may be the only solution.