Bell’s palsy may lead to permanent disfiguring sequelae. A sequela is a condition which occurs because of a previous disease. Surgery can prevent sequelae in Bell’s palsy. The health care practitioner should strive towards the early identification of patients who have the risk of developing permanent sequelae and refer them urgently to trained specialists. 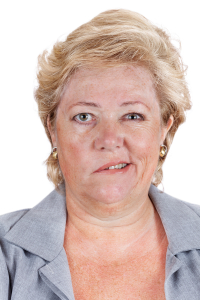 The epidemiology of Bell’s palsy.

Bell’s palsy is an acute onset of unilateral facial nerve paralysis or paresis. It has a lifetime risk to occur in 1 out of 60 people. It has an incidence of about 30 per 100 000 people, occurring equally in males and females and equally on the left and the right sides of the face. Patients of all ages, including children can be affected but it is more common in the age group 40- 50 years. If it occurs in children, sclerosteosis (marble bone disease) must be ruled out. It is more common in diabetics and pregnant woman in the third trimester. Bell’s palsy occurs simultaneously on both sides of the face in only 1% of cases and can recur in 10% of patients. It is widely accepted that Bell’s palsy is caused by the herpes simplex virus type 1 (HSV-1) although it has not conclusively been proven.

The risk of developing sequalae in Bell’s palsy.

30% of all patients with Bell’s palsy will have a paresis (incomplete loss of function) and will recover fully in over 95% of cases, thus a very good overall prognosis. The other 70 % with paralysis (complete loss of function) will have a variable outcome with 15% degenerating and recovering with permanent sequelae. It is this group which may benefit from decompression surgery.

As mentioned above, sequalae are conditions which occur because of previous disease. The sequelae of Bell’s palsy have been shown to lead to anxiety, depression, withdrawal, issues with dating and difficulty establishing new friendships. It may even lead to financial problems as patients with disfigurement are less likely to be employed. Sequela that may occur after Bell’s palsy include:
• Synkinesis (distinct muscle groups function inappropriately as a unit due to faulty reinnervation, for example the eye that closes when the mouth moves).
• Contractures (stiffness on one half of the face, a true spastic state due to loss of central inhibition).
• Involuntary twitching of some muscle bundles.
• Gustatory tearing (“crocodile tears”) – when eating, tears run down the face. This is due to incorrect reinnervation of the nerve supply to the submandibular salivary and lacrimal glands.
• Permanent weakness of some muscle groups.

Fortunately, early treatment with steroids reduces the number of patients with severe sequelae to less than 10%.

Identifying patients that may benefit from decompression surgery.

Patients presenting with paralysis may benefit from facial nerve decompression surgery is performed within 2 weeks after onset. When surgery is delayed beyond this period it is considered not to be effective. Patients who present with paralysis should immediately be placed on corticosteroids and have eye protection implemented. In addition, if commenced within 72 hours of onset anti-viral medication may add additional benefit. All patients with a clinical paralysis (House-Brackmann grade 6) should commence with electrodiagnostic testing in the form of electroneurography (ENOG) after 3 days of onset. This should be performed on alternative days and if shown that degeneration exceeds 90%, electromyography (EMG) should be ordered to confirm that voluntary muscle contractions are absent. It has been demonstrated that 90% degeneration on ENOG represents a watershed between good and poor recovery. Patients who fulfil the above criteria may benefit from facial nerve decompression surgery. 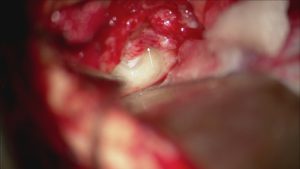 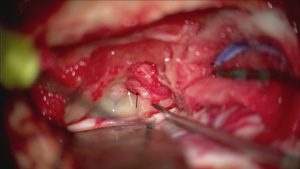 Who performs the surgery?

Facial nerve decompression surgery is performed by a trained neur-otologist or otolaryngologist utilising the transtemporal supralabyrinthine middle fossa approach. During surgery the labyrinthine segment and meatal foramen are surgically decompressed to eliminate tension on this critical and smallest diameter portion of the facial nerve.

What is the outcome of the surgery?

In addition to surgery, mime therapy should be instituted as soon as movement returns. Mime therapy is a combination of physiotherapy and Mime that has shown to reduce sequalae such as synkinesis and contractures. Regular physiotherapy, electro-muscular stimulation and acupuncture are not advised in the immediate period after onset of Bell’s palsy. Bell’s palsy is a neural condition and atrophy of muscles do not occur early on, so no benefit exists. In fact, some of these therapies may even be harmful!

After optimal recovery has occurred, residual sequelae may be managed with a combination of mime therapy, botulinum toxin A, fillers, selective neurolysis and other plastic surgery. The result however is unpredictable and if the long-term effects of the sequala of Bell’s palsy is considered, timeous surgical intervention may be a better alternative.